When college student Matt May received a diagnosis of acute lymphoblastic leukemia, his world changed in an instant. But a matter-of-fact promise from his MCA doctor kept Matt’s confidence high, despite struggles and setbacks, and kept him pushing toward a clean bill of health.

From the outside, Matt May seems like a typical college student. The 20-year-old Columbia, Missouri, native, who excelled in high school and ran on the Rock Bridge cross-country team, currently attends Truman State University in Kirksville. But during his freshman year, Matt began experiencing a lot of pain and fatigue, with no real explanation for his symptoms. One February night, while watching the NBA All-Star game, Matt, a huge basketball fan, says the pain in his arm got so severe that he knew something was wrong.

“And that was the first thing that set us off,” Matt says. “I saw a couple doctors in Kirksville the first week. It wasn’t until the following week that we got some blood tests, got some results, and my mom texted Dr. [Mark] Vellek [at Missouri Cancer Associates], and he had us come in right away. Within 24 hours, we had a diagnosis.”

Acute lymphoblastic leukemia: It was a diagnosis that changed their lives in an instant.

“I had no clue what it was,” Matt says. “It was just completely out of the blue.”

A type of blood and bone marrow cancer that affects white blood cells, acute lymphoblastic leukemia is the most common childhood cancer. It often causes bruising, fever, infections and, as in Matt’s case, severe bone pain. It was a scary diagnosis, for Matt and for his parents.

For Matt, Dr. Vellek’s matter-of-fact, confident statement at the beginning of his cancer journey helped keep him positive through the next year of treatment, which began with chemotherapy within about four hours of his bone marrow biopsy. 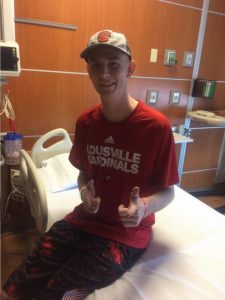 “Treatment was a whirlwind,” Matt says. “The first stage of getting all my chemo here in the hospital, that was intense — just kind of around-the-clock. One would run out, and they would hang another.”

Matt’s aggressive treatment plan included four different cycles of intravenous chemotherapy. He’d spend one week at Boone Hospital receiving treatment and then two weeks off to allow time for his body, reeling from the side effects of chemo, to heal. Then he’d check back into the hospital to do it all over again.

“That was our goal, but a lot of times it would take a little longer than that to get things put back together,” he says.

When the first stage of treatment was complete, Matt was able to transition to receiving chemo at MCA. That, he says, is where he found a real sense of community.

“That atmosphere in the chemo room is so special,” he says. “Nobody wants to be there, but the community is just incredible, and you feel like you’re at home.”

Matt leaned on a strong support system at home and school, too. Close friends from Kirksville would drive an hour and a half just to spend 30 minutes with Matt in the hospital. His parents, who were with him every step of his journey, were good about setting boundaries. But they also understood that sometimes he just needed to feel like a normal kid. 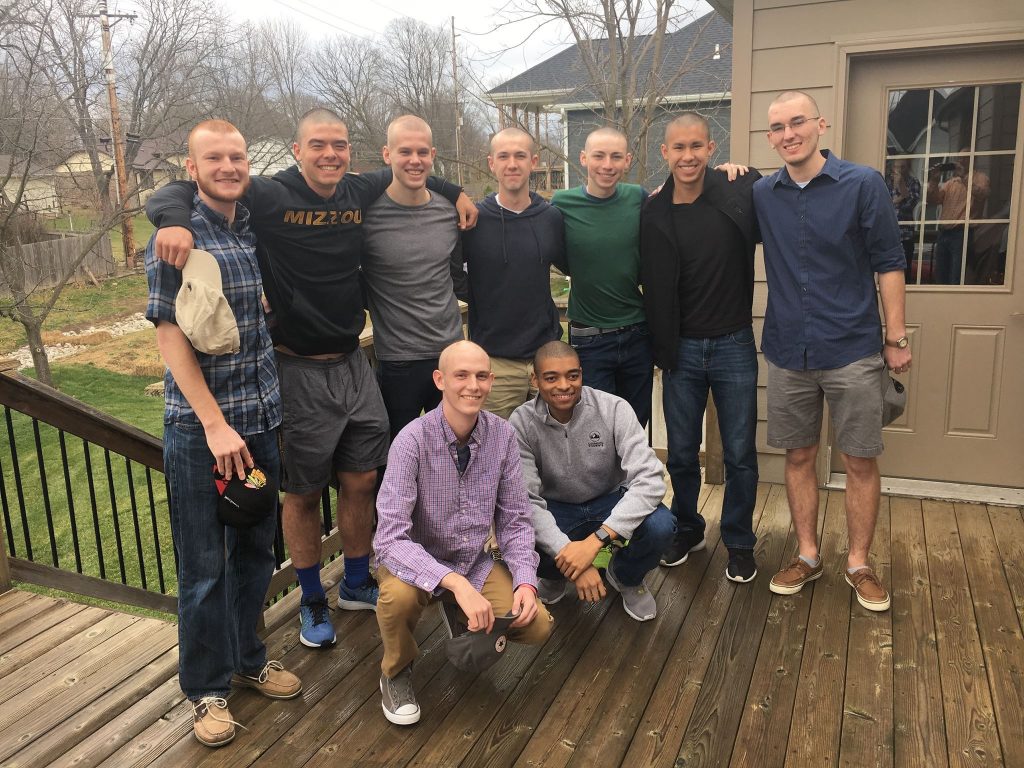 Matt’s friends show solidarity for him by shaving their heads while he underwent chemo treatment.

“They still gave me a little bit of freedom,” Matt remembers with a laugh. “Like when I really wanted to go to the movies. They said, ‘OK, but you have to go to the 11 o’clock show and wear a mask and sit in the back.’”

In total, Matt’s chemotherapy treatment lasted almost nine months. When he and his family finally got the news that he was cancer free, he says it was one of the greatest feelings in the world.

“It was a beautiful fall day,” Matt says. “We were sitting in the backyard of a family friend’s house, just talking to them. We got the call, and my first thought was, I still had the PICC line in my arm, and I was like, ‘Can we go to Missouri Cancer right now and get this taken out?’ Dr. Vellek was like, ‘Sure, why not?’”

“ A couple nights later we went to dinner at CC’s with the Velleks and celebrated,” Matt adds. “And just thanked God.” 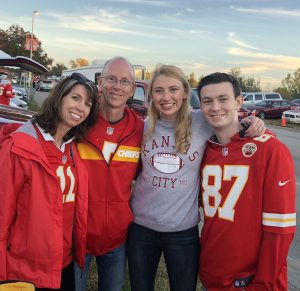 Matt’s family was with him every step of his journey.

‘Just keep your head up’

As far as treatment going forward, Matt has two oral chemo medications that he’ll continue taking each day until February. After that, it’s checkups every six months.

Talking with Matt today, it’s hard to ignore the positivity he exudes. Even when reflecting on the past year, he says he always believed that everything was going to be OK.

“I kind of just had this confidence that everything was going to turn out fine and that God was going to take care of it,” Matt says. “And he did.”

That’s not to say he’s forgotten the struggle and setbacks. In fact, his encouragement to others who have been recently diagnosed with cancer is to allow themselves to feel the hard parts while continuing to look ahead.

“It’s going to be hard, and there are going to be days when you can’t lift your head, you can’t get out of bed, you just feel terrible — and that’s OK,” he says. “As terrible as it is, that’s normal. That’s unfortunately cancer, and it sucks.

To learn more read “What Are Common Symptoms of Leukemia?”