When Sara Davidson was diagnosed with Hodgkin’s lymphoma back in 1999, her team at Missouri Cancer Associates didn’t waste any time, with treatment starting just two weeks from her initial diagnosis. Today, Sara — a 19-year cancer survivor — is living proof of the importance of having faith in positive outcomes.

Before July 2, 1999, Sara Davidson was a happy, active mom, full of energy and full of life. She loved finding new ways to get outside and moving while enjoying time with friends and family and had recently taken up golf. But as she worked to improve her swing, Sara noticed a lump in the left center of her chest. She wondered if it might be the result of a strained muscle from over-swinging, but when it didn’t go away, she decided to get it checked. 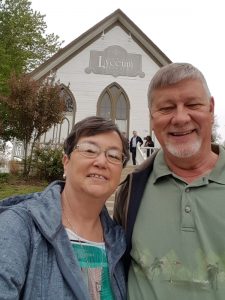 Sara’s husband was great support during her journey.

After an initial examination, Sara’s doctor recommended that she have a surgical biopsy, which they did the following week. That biopsy was then sent to the Mayo Clinic on Monday. That Friday, her doctor called her on the phone with a diagnosis that would shake her world.

“He says, ‘You have Hodgkin’s lymphoma,’” she says. “I found out at work and told some friends, and we cried. And then my husband and I headed over to Columbia from Jefferson City.

As Sara waited in the examination room at the hospital in Columbia, in walked the doctor whom she later would credit with helping to save her life.

Two weeks from her diagnosis, Sara had her first treatment. 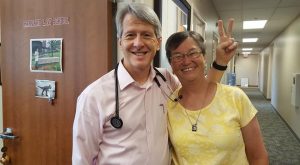 Sara and Dr. Velek are all smiles.

From there, things continued to move quickly. Sara had eight rounds of chemotherapy treatments every two weeks. Following successful treatment and a few more tests, she got her chemo port out and was turned over to a radiation oncologist, Dr. Mark Bryer, in Jefferson City. After 17 rounds of radiation with him, Sara received the news she’d been praying for since the beginning of her cancer journey.

But Sara wasn’t so easily convinced.

‘Don’t be afraid to ask’ 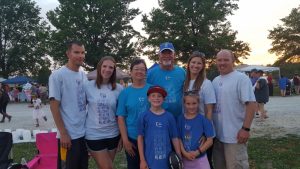 Sara and family at an area Relay for Life event.

Today, 19 years later, Sara is a proud cancer survivor. Although the road wasn’t easy, it has helped shape her perspective. She doesn’t let the small things bother her any more. And she keeps her mind and heart focused on what matters most.

“Life is good,” she says. “I laugh more and spend more time with my family and friends.”

Her faith, she ways, also helped her though.

“I have faith in God, and I prayed to Him to help me get through my journey,” she says. “And of course, I had faith in Dr. Vellek and the Missouri Cancer Associates staff. And faith in my family and friends.” 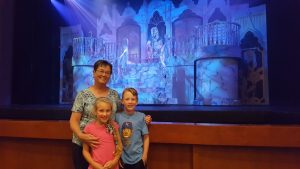 Sara enjoys time with her grandchildren.

As for her experience at Missouri Cancer Associates, Sara says everyone she encountered had her best interests at heart.