Encouraged by her doctor and mother-in-law to get a long overdo mammogram, Karen Singleton credits her successful, whirlwind breast cancer treatment to early detection and a top-notch medical team.

It had been four years since Karen Singleton had her last mammogram, but she wasn’t worried. After all, her previous mammogram, albeit years ago, had come back normal, and she had no family history to cause concern. She felt fine — great even. But after repeated encouragement from her family physician, Dr. Nathanial Murphey with Boone Medical Group, and mother-in-law to make an appointment for the long overdo exam, Karen decided to schedule a mammogram. As it turned out, that simple, preventive measure in March 2018 ended up saving her life.

“They called me the next day and said I needed to have an ultrasound done,” Karen says of the days following the mammogram. “While I was doing the ultrasound, they said we needed to get a biopsy done, and they said, ‘Can you do it now?’ And I said yes, and we just went from there.” 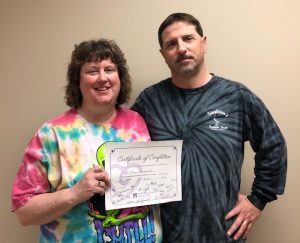 Karen and her husband celebrate the completion of her radiation treatments.

As Karen awaited her results from the ultrasound, the reality of the situation began creeping in — and so did the fear.

“It just freaks you out,” she says. “I was thinking everything was good, and all of a sudden I get the call [to schedule an ultrasound]. It throws you for a big loop. My husband travels for business, so he wasn’t home. So I’m just home by myself freaking out, nobody to talk to. So you just kind of scream a little bit, then you may cry, and you just sit in quiet.”

The day after the ultrasound and biopsy, Karen received a phone call from her radiologist Dr. Terry Elwing, who told her that she did, in fact, have breast cancer. The good news was that the tumor was caught early, which meant it was highly treatable. Still, they wanted to move quickly.

“I set up appointments with Dr. Anne Peterson (surgeon) and Dr. Liana Makarian (oncologist),” Karen remembers. “It just flew by. It seems like it was a whirlwind. It all happened so fast.”

Because of her early diagnosis and the location of her tumor, Karen’s treatment plan included a lumpectomy, which she had in April 2018, followed by internal radiation — also called brachytherapy or seed implantation — is a type of cancer treatment. It delivers a high dose of radiation directly to the tumor and helps spare nearby tissues. 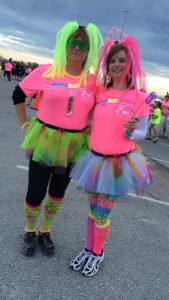 Family and friends supported Karen during her treatments.

The doctor worked up a treatment course for Karen’s specific case: two times a day for five days. Each treatment started with a scan to make sure the radiation catheter hadn’t moved, and then Karen was taken into the radiation room, where she was hooked up to the radiation machine by way of the catheter.

“After a double check that everything was hooked up properly, the huge thick door was closed, and treatment started,” Karen says. “Each treatment lasted approximately 8 minutes and 13 seconds. During each treatment I would count holes in the tile on the ceiling or just close my eyes and sing along and tap my left hand or left foot with the music from the radio they had in the room. Then when it was over.”

Although Karen was alone in the room during each radiation treatment, she says the radiation nurses made all the difference when it came to her overall well-being.

“Everybody was so very helpful,” Karen says of the experience. “I felt like there were no stupid questions. The radiation nurses, the smiles, I can’t say enough. They see you at your absolute worst, and they still have smiles on their faces. And you want to smile back and make them smile. They’ve become part of my family. I can’t imagine not having them in my life now.”

‘Its OK to freak out’

Now a full year since her cancer diagnosis, Karen is still amazed by how quickly MCA carried her from diagnosis to treatment to complete remission. She will remain on tamoxifen for five years and will continue with regular exams, but for all intents and purposes, her life is back to normal. 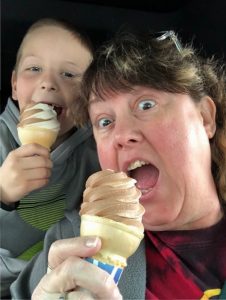 Karen makes sure to enjoy the fun times after her breast cancer diagnosis.

Reflecting on the past year, however, Karen is quick to emphasize the importance of truly processing the diagnosis and how doing so helped her move forward in her own cancer journey.

“Freak out,” she says to others recently diagnosed with cancer. “You have to do it. You can’t hold it in. It will make you sick — not only physically sick but also mentally sick — and it’ll wear you out. Just scream, yell. I did. I probably just sat and screamed at the top of my lungs, and it really helped.”

After that, she says, is when you can start moving forward.

“Then you start talking and smiling and laughing,” she says. “You have your family and friends around and your medical team. Start talking, and that’s how you’ll get through it.”

The American Cancer Society recommends these cancer screening guidelines for most adults. Screening tests are used to find cancer before a person has any symptoms.

Women should also know how their breasts normally look and feel and report any breast changes to a health care provider right away.

Some women – because of their family history, a genetic tendency, or certain other factors – should be screened with MRIs along with mammograms. (The number of women who fall into this category is very small.) Talk with a health care provider about your risk for breast cancer and the best screening plan for you.

Schedule your next mammogram by calling Boone Hospital Center at 573.815.8150.

For news about Harris Breast Center and patient stories, check out MyBooneHealth Blog.

Learn more about breast health in our Health Library.