Staying Focused on Life Outside of Cancer

After discovering he had cancer, Michael Lilien was determined to keep running his life the same way — all the way through remission.

Michael Lilien had a goal — to complete a marathon before he turned 40 years old. He began training in February 2018, and by autumn, he was running up to 15 miles at a time.

“In terms of endurance, it was the best I’d ever felt,” he says.

In the course of his training, Michael noticed a lump in his groin. Because it was painless and didn’t appear to be causing any problems, the then-38-year-old kept running. A couple of months later, though, everything changed. He began to notice a sharp pain in that spot whenever he turned corners as he walked around his house. 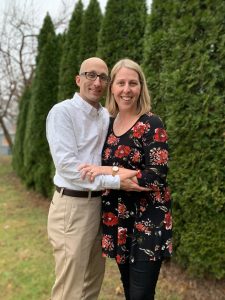 Michael’s wife, Megan, encouraged him through his battle with non-Hodgkin’s lymphoma.

His wife, Megan, encouraged him to get the lump checked out. He did, expecting it was a hernia, and he told the doctor as much. But after a brief examination, the doctors knew Michael didn’t have a hernia. The lump was an enlarged lymph node.

Within a few weeks, his medical team surgically removed the lump and sent orders for a tissue biopsy, followed by orders for Michael to undergo a full-body positron emission tomography, or PET scan.

When he entered the room for the scan, Michael says he was feeling positive about what he would see. “I actually was trying to will whatever it was out of (my body),” he says.

Afterward, he asked the technician if he could take a look at the PET image. The moment he saw the yellow stretching all the way from his ankles to his fingertips, it hit him: he had cancer.

“It was a very lonely feeling, standing in that PET scan room, knowing what it was,” he says.

During his marathon training, he’d had no way of knowing what he was truly preparing for — the cancer fight ahead of him. The physical aspect of training had strengthened his body and built endurance, but more importantly, the mental conditioning had taught him to keep putting one foot in front of the other.

“When you get to the ninth or tenth mile, [running] is as much a mentally taxing an event as it is physical,” Michael says. “It was good training. You have to keep taking one step forward and thinking positively.”

Keeping Life as Normal as Possible 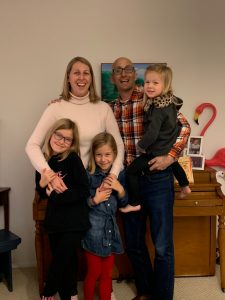 Michael’s family helped with hugs, kisses, and worked to keep things as normal as possible.

After the scan, Michael returned home, heavy with the news that he had grade 3 follicular lymphoma, a type of non-Hodgkin’s lymphoma. Megan and their three young daughters — 9-year-old Adelyn (Addy), 7-year-old Josephine (Jo), and 3-year-old Anna — were there to hug him, kiss him, play with him and keep things as normal as possible.

“I liked my life, I loved the way things were going, and I just wanted to keep everything the same,” Michael says.

Two weeks before his diagnosis, Michael had mentioned to Megan that he couldn’t think of a single person in his immediate circle who had dealt with cancer, a comment he recognizes as ironic in timing. He soon discovered that, once they began sharing the news of his diagnosis, people he didn’t know well would become sources of support and knowledge.

In particular, Andy Vrooman, the husband of one of Megan’s friends, was a huge support in the early days following the diagnosis. The Liliens were at a soccer game for Jo when Megan told the Vroomans about her husband’s diagnosis. The couple smiled when they heard the news and said Andy had the same form cancer three years earlier. The two families stayed long after the game, talking about what the next six months would be like for the kids, for Megan, and for Michael. Their children laughed and played another entire soccer game while the adults discussed what was ahead.

An engineer, Michael always wants to know the why about things, and this new challenge was no different. He dove in head-first to learn all he could about lymphoma and other cancers of the blood. While discussing his findings with an elderly neighbor, a well-respected neurosurgeon, Michael again saw a knowing smile on the face of a friend. Michael’s neighbor had fought and beaten lymphoma, and he gave him a master course on what was happening in his body.

“Because of both of them, I had a good sense of what it was going to be like,” Michael says. “They gave me information I needed to put my mind at ease as much as possible on how the disease would affect my family and me, and then the biology and the intricacies of lymphoma and how it was affecting my cells.”

His newfound knowledge had a calming effect. “Those conversations did a lot to ease my stress,” he says. “I knew what it was going to be like.”

Michael kept a positive attitude during chemo treatments at MCA.

Armed with that knowledge and heeding advice to maintain life as normal as possible, Michael resolved to keep doing the things he’d always done. A very active dad, always playing, lifting and tickling his girls, he wouldn’t let them down — to a fault. At a visit to Tiger Bounce, Michael had to be reminded that he should not roller-skate with the kids or climb in the play structure with them for fear of infection. Luckily for him, Megan was watching out for her husband. Michael still played the little insider games with his daughters, such as when he turns into a tickle monster, attacking the girls, and they have to turn him back into “Dad.”

“I kept asking myself, ‘if I didn’t have cancer, what would I do today?’ ” he says. He kept his focus on the answer to that question, whether at work or at home.

Just one month before his cancer diagnosis, Michael had started a new job. An electrical engineer by training, he was excited to be learning new skills and knowledge as a forensic engineer — a position that required physical activity such as investigating a burned-out building for the causes of fire, for example.

He’d already learned a lesson in asking for help. Three weeks into the new job, Michael had an epileptic seizure, something he normally managed to control with medication. His regular medication, however, had lost its efficacy, leaving him on a no-driving restriction.

“I was very upfront and honest with my employer, and I was blessed to have support of those around me, which meant people had to drive me all over. My father-in-law, Chris Bouchard, and my former pastor, Dick Ramsey, drove me all the way to Wentzville, and co-worker and friend Ted Hutchinson drove me to places all over Missouri and Illinois,” he says. “And the biggest support was from my wife, Megan, who had to take over full-time taxi duties everywhere. They are just a few of the people that came through when I needed them the most.”

When the limitation imposed by epilepsy was eclipsed by cancer, Michael never lost sight of his intention to keep working. He only missed work on chemotherapy days and one additional day.

“I’m proud of that,” he says. “Putting a challenge in front of me drives me. I’m competitive with myself. I try to make something (like cancer) worth something.”

Family, Friends and Faith Made the Difference

Losing the ability to drive just prior to his diagnosis gave Michael a small dose of what it means to show vulnerability, a lesson that served him well in the months that followed.

“With the driving, I was very reticent about asking for help,” he recalls. Advice from his father-in-law helped put things in perspective: “If people want do it, they will do it,” he told him, sharing a simple, honest way to look at what it means to give and accept help from others.

In the months that followed, the Lilien family received more lessons in how to accept help. Fellow members of Columbia’s First Presbyterian Church on Hitt Street brought so many meals the family had to ask them to stop because it was too much food. Friends stopped by several times a week to check on them or to take their kids to an activity. Supporters from their daughters’ Girl Scout troops did the same. 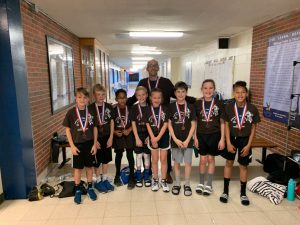 Michael enjoyed coaching and keeping active during his journey.

After achieving remission, Michael says the true meaning of the depth of love and support in his life fully hit him. While giving a testimonial in front of his congregation, he says he felt the support of a thousand pairs of hands behind him.

It was a lesson in strength that he shares with anyone facing a cancer diagnosis and treatment. “Don’t be afraid to be vulnerable,” Michael says. “I’d never done that in my entire life, but it was a comfort to be able to rely on so many people for so long.”

Michael Lilien plans to begin training again for the Show-Me State Games swimming competition  next summer and then run the MO’ Cowbell Marathon in St. Louis in October.